Thank you for your patience while we retrieve your images.

Created 5-May-13
80 photos
This gallery is the product of five days traveling with my son Scott, first in extreme western Virginia and then through a large, varied swath of southern West Virginia to catch at its peak one of the wettest springs in recent memory. In Virginia we first went through Thompson Valley and Burkes Garden in Tazewell County. We followed that with a day along the incredible Farm Heritage Trail series of roads in Monroe County, West Virginia and then a day and two nights around the New River Gorge and its super high bridge and ghost towns along the river. Then came a long drive through deep coal mining country in the extreme SE corner of West Virginia, finishing that drive with a visit to Coalwood, home of the Rocket Boys, and a night in Welch.

The last day was planned to be a quick trip into Wolf Creek valley just north of Burkes Garden, followed by what I thought would be a drive through pretty, isolated farm country down the very long, narrow Rich Valley to the East of Burkes Garden, finishing in Abingdon. Rich Valley was a stunning surprise: the "pretty farm country" turned out to be as spectacular a stretch of farmland as the Farm Heritage Trail had been. Well, almost.... Both areas rival the best of the Highlands and Islands of Scotland.

I've labeled the individual roads for some of the photos. In the rush to prepare for the trip I forgot to log in the non-Nikon lens data for my old D3x and D3s, which seldom get those particular lenses. So some of the EXIF information is incorrect as to lens ID in the original EXIF data. To keep from confusing things, I put the correct data in the caption for each image and just left the EXIF feature off.

Every image you see here is with the Picture Control setting at Neutral. Nothing is enhanced, set a vivid, or the colors deepened in post processing. Two images were done with a polarizer, and they are labeled as such. I've never seen grass any greener than I saw on these farms this past week. Obviously two species of grass are much deeper green than most of the other varieties. One is a deep rich blue green, the other a kind of lime green. The color is even deeper, almost irredescent, if the grass is in light shade from clouds. I've forgotten what little I once knew about grasses, so I can't identify them. But what you see is what we saw....

For by FAR the best view of these images, use the slide show feature (red button upper right corner this page). If you have the 5-6 minutes for the whole show, turn your sound up for the music, Otherwise you can take control of the show with the thumbnail bar at the bottom of the slideshow page and select which images you want to view in that much better format.

Going in for the night: West End Rd, Burke's Garden

The same farm, perched along a high ridge....

Looking down from the bridge to barn in previous image. 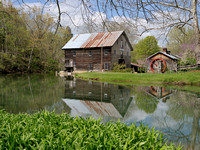 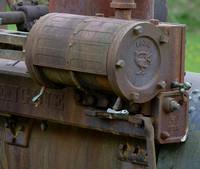